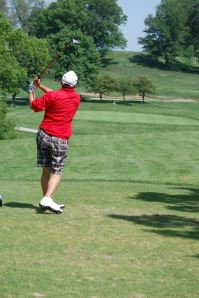 Hitting a hole-in-one is nothing new for Special Olympics athlete Jason Wright from Springfield.  Wright shot his first hole-in-one in June 2004 at the Wellington Country Club in West Palm Beach, Florida. His second came in October 2007 at Millwood Golf and Racquet Club in Springfield.  This past weekend, Wright added a third to his list of accomplishments after a 210-yard tee shot landed on the green and rolled into the cup on Hole #13 at Swope Memorial Golf Course in Kansas City.

Wright was golfing with former Kansas City Chief Anthony Davis and two fellow Special Olympics athletes at last weekend’s Dare to Dream Golf Scramble to support Athlete Sports Camp, to be held in June.  Upon seeing the ball in the hole, Davis picked up Jason in pure jubilation.  According to Davis, “When we got ready to tee off, the volunteer at the hole told us how hard this par 3 was. Jason told her he could do this.” 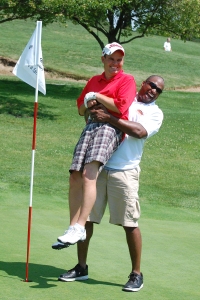 Wright has participated in Special Olympics Missouri for 18 years. “Golf has changed his life,” according to his dad Dennis Wright. “To be able to get on a golf course with other people where he can feel accepted has built his self-esteem.”

His list of accomplishments may well make him the most decorated Special Olympics athlete in Missouri’s history. Since Special Olympics Missouri added golf to its sports calendar, Wright has won 17 state tournaments. In 2008, Wright was a gold medalist at the Special Olympics National Invitational Golf Tournament, held at the PGA Golf Club in Port St. Lucie, Florida. Wright competed against 23 of the best Special Olympics golfers in the United States.

Wright has competed in seven Special Olympics National Invitational Tournaments. In addition to his National Championship in 2008, he has had two second place finishes and two third place finishes at the National Invitational Tournament. Wright also finished twelfth in the world at the Special Olympics World Games held in New Haven Connecticut in 1995. He also has won 17 state tournaments in Missouri. 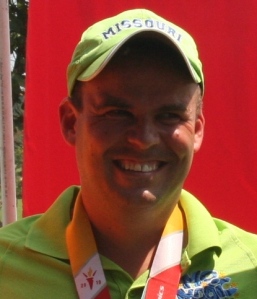 A quiet and humble guy, Wright never brags about his accomplishments.  However, as part of the fun banter he has with of his golf buddies at Millwood, he asks them how many hole-in-ones they have. Some of them have as many as four. After Saturday, Wright says, “I’ve got 3 hole-in-ones. Now I can start working on number 4.”

No doubt we’ll soon hear of his next one.