Each year, we recognize those who have made significant contributions to our program. Areas announce their winners at Area Spring Games, and the statewide winners are unveiled at the Opening Ceremonies of our State Summer Games. Here are this year’s honorees.

This year’s Outstanding Volunteer is Rose Schwendemann. Rose comes to us from Shop ‘n Save, where she was the Manager of Front End Operations. Shop ‘n Save is one of our biggest partners, which you already know if you’ve been to any events in the St. Louis Metro Area. They do an incredible job of raising funds and awareness for Special Olympics Missouri, and Rose is cut from the same cloth.

She volunteered to be Shop ‘n Save’s “champion,” or point person, for our annual Wheels for Winners Raffle in 2010. She liked it so much that she returned as a champion for the raffle again in 2011. She played a key role in distributing raffle tickets, logging sold tickets, and scheduling times to have the 2011 Camaro parked in their store to boost sales. Her husband, Terry, and son, Jason, have gotten involved in the effort as well, volunteering with Rose to pick up the Camaro an hour and half away.

Rose became known for her elaborate, color-coded Wheels for Winners calendar in her office. Her goal was to beat the previous year’s Raffle total of $25,000. Well, thanks to Rose’s hard work, the 2011 Raffle total surpassed that by $12,000, raising $37,000!

Rose also volunteers at other events around the St. Louis Metro Area, including the Polar Plunge and Over the Edge. Her son, Jason, has already caught the SOMO bug and has begun fundraising to go Over the Edge in St. Louis this October! Rose – your efforts, passion, and enthusiasm are definitely contagious. We are so impressed and thankful for your support! 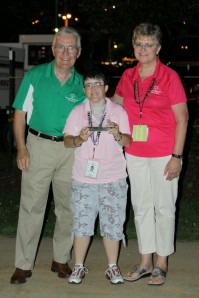 The Central Area staff cannot remember a time when the Brokamp family was not an integral part of the Special Olympics Missouri program.  In fact, we can’t remember a time when the Brokamps have ever said “no” to the Central Area.  Let’s say we needed someone on short notice to speak about what Special Olympics has done for them… the Brokamps always make themselves available.  They’ve been there to set up, tear down, score, escort, register volunteers, recruit volunteers… the list goes on and on.

Over the years, the Brokamps have brought that kind of enthusiasm to the Central Area and to the rest of Missouri, but in 2011 they continued to step up their involvement.  Beth has been asked many times to represent SOMO as a public speaker, especially following her induction into the Special Olympics Missouri Hall of Fame this year.  Linda served on the Columbia Polar Plunge committee as the Post Party Chair, and she has taken on additional duties this year as the Chairman of the State Summer Games and the Family Recruiting Chair of the Capital Campaign.  Ken is no stranger to the SOMO staff either – he’s always there as a volunteer in the souvenir stands, getting Beth to and from events, and working with Linda to accomplish her work.

The energy in this family is like none we’ve ever seen!  We feel honored to have the Brokamps as friends and to present them with this well-deserved award for Outstanding Family in 2011! 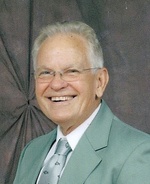 This year’s Outstanding Coach honors go to Lyle Kirk.  Lyle coached the Grundy County DAWGS for many years and worked with teams in a variety of sports, including basketball, bocce, softball, and bowling.  Lyle had a special way of taking our athletes under his wing, developing trust, and encouraging them to become self-confident.  Lyle passed away on November 21, 2011.

We will always remember Lyle’s great attitude, amazing heart, and infectious smile.  At every Northwest Area Tournament you could count on Lyle coaching his teams to be respectful and to play with honor.  If Lyle happened to be watching another team from Grundy County play, you could always count on him to be the loudest fan, encouraging his athletes to do the “DAWGS” chant on the sidelines!

Lyle also helped to start up the first-ever Young Athletes Program in Trenton, MO which continues to this day.  On Young Athlete Nights, he always made sure every athlete had a buddy, they all understood, and they all could participate.

At Lyle’s funeral, one of his athletes said, “It didn’t matter if we won or lost, Lyle always said all that matters is that we did our best.  We always did our best and it shows because at our last tournament we won the sportsmanship award.  Lyle helped us do that.”

As you can see, Lyle instilled in these athletes what our coaches are meant to instill:  sportsmanship!  His athletes will live on remembering what Lyle taught them. They will continue to play with honor and heart in the name of Lyle Kirk.

Lyle Kirk was a special man and a very special coach for the Northwest Area.  We will miss him greatly.  Another coach from Grundy County, Brenda Thorne, put it quite nicely: “HE IS OUR HERO!” 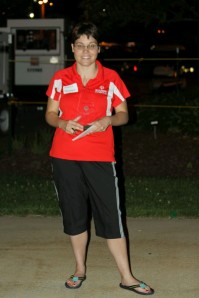 We are proud to honor Leanna Krogmann as our Outstanding Athlete in 2012.  In 2011, Leanna reached a major milestone in the career of any Special Olympics athlete: attending the World Games in Athens, Greece.  Better still, she competed in her favorite sport, swimming.  Leanna moved from Hannibal to Columbia and immediately began her training as a swimmer.  Every parent, coach, and athlete she comes into contact with takes notice of her infectious “never give up” attitude.  Always looking for a new challenge, she joined a new team to work with a college-level swim coach and continued to flourish as an athlete.

She’s more than an athlete though.  Leanna worked with her parents to raise over $5,000 to pay for her trip to the World Games.  Always an ambassador for Special Olympics, she embodies the spirit of competition, learning, determination, and teamwork.  Her coaches recall that after she won a gold medal at Athens, she returned home to Columbia wearing all four of her medals at once with the gold medal underneath the rest.  She was wearing them in the order that she received them, none more important than the others.  Each of those medals represented a unique achievement and Leanna wore each of them with pride!

Today, Leanna Krogmann trains and competes as hard as ever.  For her, Special Olympics is a way of life, full of opportunities even after competing at the World Games.  Thank you for representing us so well, Leanna!

View photos of all of our nominees on our Facebook page.