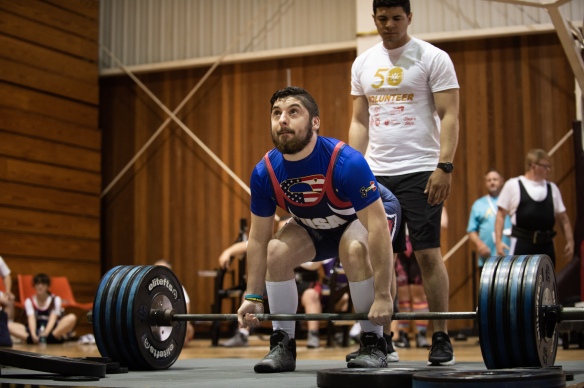 Charlie Phillips competes in the deadlift at the 2018 State Summer Games. Photo courtesy of Travis Duncan.

Dipping his hands into the tub of chalk, 21-year-old Charlie Phillips, set his sights on the 405-lb. obstacle sitting in his way.

His laser-focused eyes stared straight ahead as he rubbed the powder into each nook and cranny of his hands. As he approached the seemingly immovable object, he clapped his hands together a couple of times, watched the powder envelope him as he stepped up onto the platform, flashed his patented Charlie Phillips wry smile and waved both hands up and down to get family, friends and strangers surrounding him to cheer him on.

The crowd’s cheers started to slowly build as he bent his knees and wrapped his hands around the bar, left hand facing in, right hand facing out. With his grip established, he fought against gravity and started to raise the 405-lb. bar off the ground. He did so confidently, but slowly enough to not lose his form as three judges sat to the side analyzing every movement.

Pockets of people in the crowd started to chant his name until they all finally fell into unison, “Charlie! Charlie! Charlie!” The chant grew louder and louder as he approached the top of his lift.

After reaching the apex of the lift cleanly, he started his descent, his steely eyes still stared straight ahead. After realizing he had a clean lift, he flashed that smile again and let the 405-lb. bar slip from his hands as it was just inches from the ground. The weights bounced off the ground a few times, kicking up a small puff of powder from the spot his hands just occupied.

Three white flags went up in the air from the judges surrounding the platform – a clean lift and a new personal record in the deadlift for Phillips.

He stepped down from the platform, beat his chest and pointed to the sky for his friends, Bradon Krull who passed away in 2016, and for Landon Smith who passed away earlier this year.

“Every time I’m at a competition or a meet, I pray and do this for him (points at sky) and he’s up in heaven and he’s my role model,” Phillips said.

As his mom, Tina Schoonmaker, cheered him on, she said she couldn’t help but think how far Phillips has come.

‘He’s Rocky, Vince Papale and Rudy all rolled into one’

While Phillips has spent the last 14-plus months training for the 2018 USA Games in Seattle, there were times when Tina wondered if he would ever walk or talk.

Phillips was born with a form of congenital myopathy where he had muscle, but no muscle mass; he also has X-linked creatine deficiency, which still affects his speech and motor skills. In addition to those two conditions, all of his midline organs (liver, gallbladder, stomach, pancreas, spleen, kidney and small and large intestines) developed wrong. Because of all of this, he’s had a total of 21 surgeries or medical procedures.

The doctors told the family he’d never talk nor walk.

“We had him fitted for a wheelchair just before his fifth birthday,” Schoonmaker said. “And within a week Charlie started to walk and talk.”

Growing up in central Pennsylvania, Phillips had trouble finding real friends, though it definitely wasn’t because he was too shy.

“Charlie has always been very outgoing and very friendly and social,” Schoonmaker said. “He has always loved sports of all kinds and just wanted an opportunity to play with other kids.”

But the community and school sports league wouldn’t let him play on any of their teams. And the “friends” he had, Schoonmaker said they only hung out with him so they could make him do certain things to laugh at him.

One day, after a humiliating incident at school, his dad, Ray, who was on a business trip at the time, heard about Special Olympics from his traveling colleague after Ray explained the incident.

“Ray called me and said, ‘I’ll be home in seven days and at that time I want Charlie signed up (for Special Olympics)’,” Schoonmaker said.

“Needless to say, Charlie’s life and our lives changed forever. He finally got the chance to be like other kids and be like his sisters and brother and able to play in sports. Being in Special Olympics has opened so many doors for Charlie.”

“Powerlifting is my favorite because I get to show off my muscles to all the girls,” Phillips said with that same wry smile mentioned before.

“(Special Olympics) has changed my life. It helps me meet new people and have fun!”

Since getting involved in Special Olympics, Schoonmaker said they haven’t been able to keep up with Phillips and his love for the program and all of his new friends.

“We’ve tried hard to teach Charlie that he can do anything he puts his mind to and to never give up,” she said. “When it comes to sports, Charlie has a passion and drive. Charlie is very goal-driven and is willing to do whatever it takes by working hard and putting in the long hours to make his dreams come true.

“(He) tends to turn to his favorite movies to keep him motivated (Rudy, Invincible, and Rocky).” 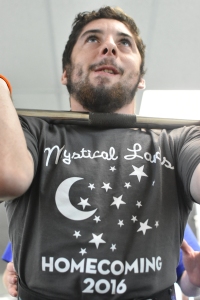 Phillips trains at the 2017 Selection Camp

In the movie franchise Rocky, Mickey Goldmill is the no-nonsense, tough-as-sandpaper personal trainer that whips Rocky into prime boxing shape. When Phillips found out he made Team Missouri, he knew that, while he was very appreciative of everything his original powerlifting coaches had done for him, he now needed to find someone with more experience in powerlifting to compete on the national stage – in other words, he needed his own Mickey.

Enter world champion powerlifter and personal trainer, Bob Boyles. He said when Tina first approached him about training Phillips, he wanted to treat him like any of his other clients.

“I’ve worked at a university where they’ve had people with disabilities, people with strokes, brain surgery … (I just saw) someone who wanted to lift and wanted to see what he was capable of if he pushed himself,” Boyles said.

Lifting, competing and training others have been Boyles’s passions since 1977. He said training Phillips has been “refreshing.”

“He looks at it as, “If I can just lift this, my life will be better,’” Boyles said. “Sports are everything to him. All he wants to do is powerlift and not many people look at it like that. I’ve worked with a lot of good athletes and they all have that ability to focus not only in the gym, but also at home eating right and resting; (Charlie) is like that.

“Maybe he doesn’t talk as clearly as other people, but he’s like everybody else. All he really needs help with is converting kilos and pounds, figuring out what weight he wants to try on the next lift at a meet and how to properly warm up. He lifts hard, but he needs to understand all of the small things leading up to a meet and figuring those out for himself.”

Phillips said he couldn’t have come this far the last few months without Boyle’s help.

During their partnership, Boyles has taken Phillips to several non-Special Olympics powerlifting meets to give him a different experience in the sport.

The above video is from an open meet in Kansas City that Phillips and Boyles attended in April 2018. Video courtesy of Tina Schoonmaker.

“He doesn’t want to just be a Special Olympics lifter,” Boyles said. “That’s why I suggested those open meets were good for him. He can fit right in and I think that’s what he appreciates is that he can get out there and prove he belongs.”

It also doesn’t hurt that with his big personality and penchant for panache, Phillips tends to lift better in front of a crowd than in the gym.

“I don’t think he could lift 400 pounds in the gym, but with people watching he’s one of those guys that seems to feed off the crowd,” Boyles said. “I wasn’t sure how he’d act, but… he wasn’t intimidated by anything. I was more nervous than he was.”

Boyles also said that his training is much more than just lifting heavy weights.

“When Charlie jokes and calls me Mickey, that means a lot to me,” Boyles said. “(Mickey) tried to keep (Rocky) on the straight and narrow. (Charlie) came in and told me, ‘Women weaken legs.’ That doesn’t mean he can’t have a girlfriend, but I like that because I’m trying to keep him from making mistakes and bad choices.

After his last meet where Phillips once again set new personal records, Boyles gave him a picture of Rocky that had been hanging in his gym.

“(He helps me) meet my goals and then move up to the next (goal in weight). He tells me, ‘You shouldn’t be worried about what other people are doing; worry about yourself.’ Walk out there with confidence.”

It’s pretty safe to say that Phillips is going to walk out on that stage at the University of Washington with plenty of confidence.

When asked if he had a message for his fellow competitors in Seattle, he said, “Good luck, I will win. Watch out!”