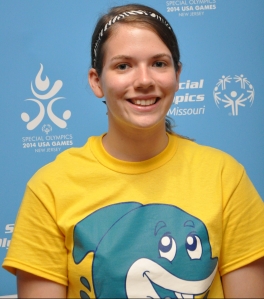 I am back for my 3rd USA Games. It is an absolute privilege to be here in Seattle as the Public Relations Assistant again. I have been involved with Special Olympics Missouri since I was born. I started volunteering at the age of 6. I competed as a Unified Partner in Bowling when I was 8 and I’ve been volunteering ever since. The build up to the games has been exciting. Every day people were commenting on our Facebook group, how many days until the games, and commenting on what the weather was going to be — because if you live in Missouri, you know it has been so hot since May.

Friday morning, my husband, Derrick and I got the car loaded and headed to St. Louis for send off. We stopped in Columbia and had a quick lunch then arrived at BCI Packing. All the athletes began packing their bags. We headed into a Grand Hall where everything was decorated in the team colors of plum and raspberry. The O’ Fallon police chief was the emcee. They had a little program for us and Coach Falco from Lindenwood gave a very inspiring speech to the athletes. Athletes then could get their hair dyed in team colors, they played giant Connect 4 and Corn Hole. Like all great SOMO events, there was a dance party. It was then time to say goodbyes and head out. I bawled telling Derrick goodbye. Officers lined up to cheer on the athletes as they walked out. 40 police officers were there with their cars. They each took one or two athletes and we loaded the cars. The police cars made a convoy to the airport, shutting down the interstate as we went. It was awesome being in this huge procession of cop cars. We made it the airport and checked our baggage. The wait was on to board the plane. I made some muffins as a snack for the trip and had put them in my bag but forgot to tape the Rubbermaid container shut. I was very paranoid that it would burst open in my bag and I would have muffin everywhere when we landed in Seattle. A lady sat next to me who waiting to board. She actually works at the University of Washington where we are staying. She was in St. Louis for a business trip. It was cool to chat with her and get to learn more about the campus. The attendant working our gate wanted a picture of all of us so we got together for a group photo quick for the airline.

It was finally time to board. They let Team Missouri get on first. Coach Rich and Libby were in the seats next to me. We had a couple of first time riders which was fun. The airlines had lots of free movie choices you could watch on your phone. I ended up watching two movies and that took almost the entire trip. The flight was a little long but not bad with some minor turbulence. We were all beat when we got there and definitely ready to get to the campus. They had a welcoming committee for us and they got our bags for us. We tried to cheer with them but we were all so tired. We made it to the campus around 10:45ish Seattle time. We had a quick coaches meeting and then off to bed. By the way, I opened my bag and the muffins were totally fine and still sealed. Whew!

It’s opening ceremonies day. That’s always a fun day for the athletes. I got up this morning to go get my credential. Still not ready. I went and ate breakfast which was a mad house but the food has been pretty good. Pin trading was going on like crazy. If you’ve never been to the games, every state has pins that they trade. Some people try to go for every state. After breakfast, Shaffer and I walked over again for the 4th time and I finally got my credential. We came back and I are hurried around to get ready for opening. Like the last three USA Games, Shaffer delivered on the uniform design. We looked stylish in our polos that had Missouri down the back. It started to sprinkle right when we started to walk over to opening. When we got over by the library, volunteers were lined by sides if the path all the way to the stadium. The athletes gave them high fives and the volunteers cheered them on. It was so neat. The first time they’ve ever done this at a USA games. We got to Alaska Airlines where we were being staged until going out into the stadium. We got a water and a Starbucks lunch. It was basically a lunchable with Starbucks written on it. I couldn’t eat the crackers or apples in it but Josh was nice and traded me his grapes for my apples. They had a pre-program for us in the staging area. Chris Pratt sent a message to the athletes and they all screamed. Then Mark Henry from WWE came out and they really lost it. Most of the athletes are die hard WWE fans. The Special Olympics cheerleaders performed. They were adorable.

It was then time to get ready to line up. They made the mistake of telling everyone to take a bathroom break right before so no one ready to line up. They had a screen set up on the inside so we could see what was going on out in the stadium. DJ Marshmello performed. Taye Diggs was the M.C. for the event. Then the states started walking out in the parade of athletes. This is my third games and I can tell you, this is the coolest part. Thousands of people cheering you on. It gives you chills. SOMO President & CEO Mark Musso came and talked with the athletes. It was finally our turn to go. They were a little behind on the time so we had to hustle. Brandon and I were going hurry past team Missouri once they called us but it was a blur. I got some photos but it went so quick. It was awesome though coming out into the stadium. We even were on ABC! Once all the delegations made it in, they had different performances. They talked about the elements and how they connected to Special Olympics. Coach Bea got to speak about her involvement so we yelled like crazy for her. Arthur, an athlete from KC, had a message for Bea, thanking her for all she did and it made most of us tear up. A Native American group performed. A girl from The Voice sang This Is Me and she did a phenomenal job. Ann Wilson sang the national anthem and messed up the beginning unfortunately but she still sounded good. The torch made its way through the stadium which is a favorite. The cauldron was so cool as it slowly trickled up and then burst in to the big flame. For the element of water, these banners dropped down from the sides of the stadium and the crowd was supposed to keep moving them like waves. It looked pretty neat. They raised the Special Olympics flag. Charlie Puth sang at the end and did a good job. When he sang See You Again, I got some of the other athletes to sway back and forth me and pretty soon the whole team was doing it. After the opening ceremonies were over, we walked back to the dorm. I had already traded most of my pins away and it wasn’t even the end of the day. When we got back from opening, I got started on uploading photos and working on some of the public relations stuff. We went and had dinner. Then I came back and Skyped Derrick. After that, some of the team just hung out until the coaches meeting. We got our equipment ready for the next day, then it was off to bed.