Each year, Special Olympics North America hosts an invitational golf tournament. Missouri is awarded a number of slots, and some of our top golfers are selected to compete. Mike Burke, a coach and Unified Partner for athlete Brian Williams, blogs his experience at this year’s tournament in Arizona Sept. 6-9.

I am the playing partner and golf coach for Brian Williams, one of the Missouri golfers.  I have been working with Brian for several years and have attended several of the National Golf events.  This year’s tournament in Arizona was one of the best runs I have attended.  From the hotel to the golf course, the employees were very helpful and were always there when you needed them.

We came in a day early and played several courses in the area.  We normally do not get to play on such courses, so we had a good time playing on them.   A great part of the tournament is getting to meet other athletes from all over the country and sharing stories about each other, the cities they are from, and how they became involved in golf.  Meeting dads and moms who are partners to the athlete showed their devotion to help their son or daughter do something they really enjoy.  Being a coach/partner gave us a chance to discuss ideas with other partners of the athlete and get some new ideas on how to help them become better golfers.

Last year I started having everyone sign the hole flag before we would tee off.  I also had the scorer sign the flag, so we had the athlete, partner and scorer on it.  It started a trend, and almost everyone was having their own groups sign the flag with the teams they were playing with each day.  It was a good way for the athlete to get to know the other people in group and make everyone feel better and less nervous.

Several times, we actually stopped the athlete before he/she hit the ball to keep him/her from getting a penalty, which would have added strokes to his/her score.  This is what Special Olympics is all about – helping each other out while playing and giving them the best opportunity to do their best, no matter what the score is.   Everyone wants to win the “Gold,” but we came back with a 4th place ribbon.  Nevertheless, Brian was very happy.   Having the chance to participate with so many other athletes and making a lot of new friends was really the best prize of all.   We took an oath to do our best, and we did just that, along with having fun and enjoying our time together.  The scorekeepers did a very good job of keeping track of every shot, and they always verified each score with all of the teams before moving on to the next hole.  The tournament had a person from the rules committee on every other hole to explain the rules and to help the teams make proper decisions, which were very helpful.

This year they let the teams ride in a cart due to the extreme heat.  Normally it is 105 in Arizona with the humidity at 5 – 8%.  This year, with all of the rain around us, the humidity was at least 50%, and we had to make sure the athletes stayed hydrated.  They had water and drinks on every hole.  We kept a close watch on the athletes, and over the three days of golf, we did not see anyone getting sick or having to quit playing due to the heat. 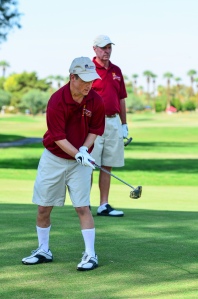 They also had a Western Night where everyone came in their best western outfit to square dance, rope cattle, and play other games, which made the night very enjoyable.  They also had Native American dancers perform the hoop dance, and everyone had a chance to take pictures with them.  The committee hired photographers, who could take your picture and give it to you at the end of the evening.  They also had a dinner dance on Saturday night, which always is a highlight of the event.  Once people start dancing, it is hard to get them off the dance floor.  A drawing was also held, where everyone had a chance to win a goody bag of special local items from each state.  Missouri gave Special Olympics t-shirts from Missouri.  We also had trading pins to give to each athlete we competed with, but we would have liked to have had something with the State of Missouri on it.  We used the torch pins and the Special Olympics hat ball markers.  We also gave these to the officials on each hole, and they really appreciated the gifts from Brian.

From breakfast to dinner, the food was always very good.  They were always on time with the food, so the athletes were able to eat and still have time to practice on the range before going to their tee time.

The awards ceremony was really special this year with some of the military handing out the awards to the athletes.  The military came from Luke Air Force Base in Arizona, and it really meant a lot to the athletes to receive the medals from the men and women of our armed services.

We stayed one extra day to play one more time.  The Wigwam courses were very good, and we just wanted one more chance to play on them before getting on a plane to fly back to St. Louis.  It has always been fun to participate and meet new people, and we are looking forward to next year in New Jersey.  I thank the committee for all they do, and I know how hard they work to make this event successful.  We just want to say thank you to all of them for putting on a very good tournament (one of the best yet), and we look forward to seeing all of them next year.

Hitting a hole-in-one is nothing new for Special Olympics athlete Jason Wright from Springfield.  Wright shot his first hole-in-one in June 2004 at the Wellington Country Club in West Palm Beach, Florida. His second came in October 2007 at Millwood Golf and Racquet Club in Springfield.  This past weekend, Wright added a third to his list of accomplishments after a 210-yard tee shot landed on the green and rolled into the cup on Hole #13 at Swope Memorial Golf Course in Kansas City.

Wright was golfing with former Kansas City Chief Anthony Davis and two fellow Special Olympics athletes at last weekend’s Dare to Dream Golf Scramble to support Athlete Sports Camp, to be held in June.  Upon seeing the ball in the hole, Davis picked up Jason in pure jubilation.  According to Davis, “When we got ready to tee off, the volunteer at the hole told us how hard this par 3 was. Jason told her he could do this.”

Wright has participated in Special Olympics Missouri for 18 years. “Golf has changed his life,” according to his dad Dennis Wright. “To be able to get on a golf course with other people where he can feel accepted has built his self-esteem.”

His list of accomplishments may well make him the most decorated Special Olympics athlete in Missouri’s history. Since Special Olympics Missouri added golf to its sports calendar, Wright has won 17 state tournaments. In 2008, Wright was a gold medalist at the Special Olympics National Invitational Golf Tournament, held at the PGA Golf Club in Port St. Lucie, Florida. Wright competed against 23 of the best Special Olympics golfers in the United States.

Wright has competed in seven Special Olympics National Invitational Tournaments. In addition to his National Championship in 2008, he has had two second place finishes and two third place finishes at the National Invitational Tournament. Wright also finished twelfth in the world at the Special Olympics World Games held in New Haven Connecticut in 1995. He also has won 17 state tournaments in Missouri.

A quiet and humble guy, Wright never brags about his accomplishments.  However, as part of the fun banter he has with of his golf buddies at Millwood, he asks them how many hole-in-ones they have. Some of them have as many as four. After Saturday, Wright says, “I’ve got 3 hole-in-ones. Now I can start working on number 4.”

No doubt we’ll soon hear of his next one.